In 2011, BYU made the strategic decision to become one of the nations top collegiate sports broadcasting networks. It started with a multi-million dollar state-of-the-art television broadcast studio. The next critical step was to bring in the best team of sports production personnel available. BYU accomplished this goal by recruiting alumnus and former ESPN SportsCenter Producer, Mikel Minor, to lead the new team. One of Mikels earliest tasks was to reinvigorate the BYU brand through a new visual spectrum, including a brand new motion design package.

In March of 2012, Mikels team started their search for the motion design firm that could meet his branding and production challenge. After multiple phone calls, e-mails and a face to face concept presentation in Provo, Utah, the decision was made in late May to go with GO. One of the BYU teams major criteria was to find a collaborative partner they could establish a positive working relationship with. It was as important as finding a creative motion design firm that understood the various nuances in creating eye-popping motion design sports packages. They believed that GO fit both objectives.

Early into the project, the BYU team knew that they had made the right decision. We were very comfortable with where we were headed. I was most pleased with how well the GO team heard our input & concerns then incorporated our thoughts into the direction, as well as their own due diligence in capturing the spirit of the university and its unique culture, stated Minor.

The project presented a few unique challenges for the GO creative team. First up was a very aggressive three and a half-month package delivery timeline. Just over 90 days to meet the kickoff of the 2012/2013 Cougar football season opener. The next challenge was creating a new brand that covered all of BYUs current and future sports programming needs. Finally these custom packages had to provide element integration into a Ventuz graphics engine, as well as a Chyron application.

Creative Director on the project, Mannix, summed it up this way, “Our task was to visually represent the past, present, and future of BYU Sports, and to tell their story with the right amount of confidence, swagger and enthusiasm.

The package successfully launched with BYUs football seasons opening game this past Labor Day weekend. To view a short selects reel of the BYU project, click here. Samples of GOs other work can be seen at the FXUTube.

The artistry of motion graphics studio leftchannel came alive Wednesday when Columbus Nationwide Childrens Hospital opened its doors for the first time since completion of a $ 450 million expansion and environmental installation, seven years in the making.

In October, 2011, leftchannel overshadowed six other design firms bidding for the coveted job of translating static graphics to elegant, organic and sophisticated motion graphics in the Hospitals magic forest and two entry corridors. Under the creative direction of leftchannel President Alberto Scirocco, Taehee Lee, leftchannels lead designer/animator on this project, while working with other leftchannel designers created a gentle and sophisticated character animation that brings birds, deer, bunnies and other woodland creatures to life with an organic quality that works with the Nationwide Childrens Hospitals child-centric, eco-friendly design.

We had seven big players from Columbus, Chicago, and New York bidding on this project, Carpenter said. All of the firms came out on top with solid graphic design, but it all boiled down to leftchannels perfect execution of the media we provided during the bidding process.

They have a great cosmopolitan background, and theyre based in Columbus. We felt that working with a Columbus firm was important, and once we met with leftchannel we knew we had the right design team.

Scirocco says he knew leftchannel had exactly what was needed to complete the hospitals motion graphics design, but was nonetheless humbled when the project was awarded to his team.

We knew we were the ideal candidate for this project but we were up against some talented firms, Scirocco said. Earning this contract was a genuine affirmation of our teams capabilities.

Established in 2003 and headed by Alberto Scirocco, leftchannel is a motion design company comprised of multidisciplinary graphic design artists specializing in motion graphics, TV spots, music videos, broadcast identities, program titles and opens, animation and graphic design, advertising and broadcast graphics. Scirocco began his career in design and art in Italy before moving to the U.S., where he helped establish leftchannel in Columbus. An adjunct professor and head of the CCAD Motion Design program, Sciroccos passion for computer animation and motion graphics is a driving force behind the firms decisively individualistic and pioneering capabilities adaptable in a multitude of fields including film, advertising, broadcast graphics, architecture, retail planning, digital installation, projection mapping and environmental design. 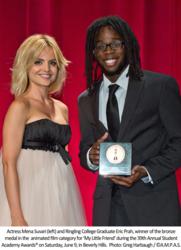 Ringling College of Art and Design Graduate Eric Prah was honored on Saturday, June 9th at the Academy of Motion Picture Arts and Sciences 39th Annual Student Academy Awards with a Bronze Award for Computer Animation. The awards were presented by actors Laura Dern, Cuba Gooding, Jr., Greg Kinnear and Mena Suvari alongside Academy President Tom Sherak at the Academys Samuel Goldwyn Theater. Eric won the Bronze for his senior thesis animation, My Little Friend. Ringling College students have won 9 Student Academy Awards in the past 11 years, as well as the most consecutive Student Academy Awards since the awards began in 1973, with four awards in a row from 2005-2008.

Eric was one of 13 students from around the world who were selected as winners in the Academy of Motion Picture Arts and Sciences 39th Annual Student Academy Awards competition. Erics film, My Little Friend, may be viewed at http://www.oscars.org/awards/saa/winners/Prah.html. The Gold in animation was won by David Wolter for Eyrie and the Silver by Mark Nelson for Jockstrap Raiders. To view photos from the event please go to http://photos.presslist.oscars.org/ and to see the journey of the 2012 Student Academy Award